For the game mechanic, see Wrath.

Wrath, also known as The Molten Lord, is a member of the Seven Deadly Sins that were originally imprisoned by the Four Horseman many centuries before the Apocalypse. However, upon the End War's premature onset and the destruction of humanity, Wrath, along with his brethren, were freed and began to ravage the Earth and threaten the Balance. He is also the tertiary antagonist and is both the second and later ninth and third-to-last boss in the game.

Considered the strongest of the Seven Sins, second to only Pride herself, Wrath is a huge brutish demon either on fire or made out of fire and wearing thick plate mail armor decorated with roaring faces and runes. Feeding off of the violence and hate of a battle, Wrath grows in strength and seeks to spread such violence as much as possible.[1]

After being freed from their imprisonment, Wrath and his brethren escaped to the war-torn Earth and each began to mold a portion of the world to their desires. Wrath soon came into conflict with angels that were intruding upon his claimed territory. However, upon easily slaughtering the angels, Wrath is confronted with the Sins' hunter: the Rider of the Black Horse, Fury.

At first, Fury began to gain the upper-hand in the fight but when calling her steed Rampage to the field, she is distracted and horrified at seeing her horse impaled with an angelic weapon. Taking advantage of his enemy's grief, Wrath attacks and severely wounds Fury with a spare angelic javelin. However, refusing to surrender, Fury uses the very weapon that is impaled in her torso to pierce Wrath's face, weakening him but the effort sends Fury into unconsciousness, allowing Wrath to survive and escape.

Later on, after Fury recovered and took out the majority of the Sins, she finds Wrath in a barren part of the Earth where Demons have taken residence. In a massive arena, where angels and demons slaughter each other, Wrath is at the center, taking absolute joy in the savagery and bloodshed. There, Fury and Wrath battle each other again and he revealed his face but this time, Fury fought without anger, disturbing and confusing Wrath. This allows Fury to get the best of Wrath, successfully killing him and absorbed his essence in the Talisman of Sin.[2]

Like his namesake, Wrath is rage and hatred unbound, taking absolute joy in savage acts of brutality and finding purpose in spreading it unto to others. His very presence can send others into giving in to their anger, as it happened with Fury briefly. Even from a distance, Fury could sense Wrath's hate-filled essence.

Wrath seems to follow some sort of personal philosophy in his unending violence, stating that "Pain is glory. Anger is love. Death is life", during a mass killing in the demon's gladiatorial arena. He even grows to admire if not feel drawn to the anger of another if great enough, as he told to Fury that in another reality, he could have loved her.

However, Wrath can't seem to comprehend how someone could fight without anger, finding it inconceivable as is shown during his second encounter with Fury. Instead of fighting with rage like before, she maintained her calm and focus, enabling her to best him in battle.[2]

In the first encounter with Wrath, he will attack Fury with sword combos, he can do a quick sword swipe, do a downwards sword slam creating fire derby and/or do a powerful sword slash, Wrath can also slash both of his swords at the same time and/or slam one of his swords down to the ground, sometimes creating a fire shock wave. After Wrath is down to the last bit of his health, he will combine the swords into creating a flaming wheel that he will then throw at Fury, even without weapons, Wrath is capable of doing hand-to-hand combos attack Fury with his right blade arm and will also attemp to hit Fury with his leg in point-clank range if too close. After a while Wrath will coker a new pair of swords.

In the second encounter with Wrath, he will now attack Fury with both a single sword and his right blade arm, with the sword he can do a sword slash or slam his sword down to the ground. With the blade on Wrath's right arm, he can do a blade slash or slam his fists down to the ground and create a series of three shock waves that Fury can avoid by simply jumping. At times Wrath can also attempt to kick Fury at point-blank range which is fairly easy to avoid. Wrath can also charge strength towards Fury and do a quick slash at her with his blades, Thought out the battle there are a series of angles and demons that battle each other, they do not hamper Fury, but they do add in supportive for Wrath, as after losing half of his health, he will turn his attention towards the enemies, and attack them, which he can recover his health with, so it is recommended that you also take out some of the enemies to limit Wrath's recovery or by depleating Wrath's health bar as fast as possible.

Though at first the battle is thought to be won after Wrath loses all of his health, he will then get armored up, will split his blades into two and then the real battle begins as Wrath now has a full health bar. This time Wrath will start the battle by throwing his swords like spinning blades which will give him a barrier of some kind and will sometimes fallow him, he will then attack Fury with a series of hand-to-hand attacks, he will charge at Fury in attempt to slash her with his right gauntlet arm, leap at a distance and slam his fists to the ground, after a while Wrath will regain his swords and will use the same attacks that Wrath used previously in the first encounter, tho his double slash has an explosion effect, then, he will repeat this process again. 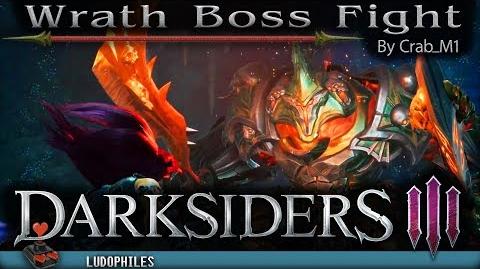 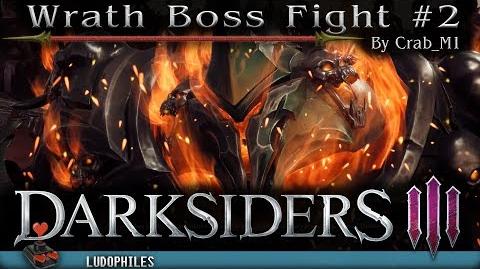 Retrieved from "https://darksiders.fandom.com/wiki/Wrath_(Character)?oldid=33226"
Community content is available under CC-BY-SA unless otherwise noted.