The Noss is a gigantic and immensly powerful Abyssal Creature that appears on Earth as a member of The Destroyer's forces. Throughout Death's search for the Rod of Arafel, he encounters and destroyes three of these grotesque monsters. They attack primarily with stomps and energy blasts but are also capable of summoning Stingers during battle. The Noss also can emit a screech to push back and opponents; a blast which is capable of destroying a concrete overpass with ease and deals high amounts of damage. These creatures are so powerful that even the Hellguard, by their own admission, dare not face one head-on.

The Noss is a relatively easy boss battle, as Death can easily slay these giants  with continuous Salvation blasts or Gorehammer explosives from a safe distance. This strategy also takes care of the numerous Stingers that the Noss will summon, which can do a great deal of damage on their own. Alternatively, he can choose to fight The Noss in close combat, although this is unwise without some way to regenerate health, as the Stinger are practically impossible to avoid, and are summoned frequently enough that the Noss is almost never without them. Additionally, the Noss's melee attacks and sonic blasts are extremely harmful without the damage mitigator of the Salvation canon. Finally, the Noss has an incredibly high amount of health, to the point where fighting one on Apocalyptic difficulty can take several minutes. Be ready to fend of the Swarm as well as Stingers during fights against this beast; they rarely appear alone. 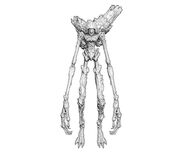 Concept art of the Noss 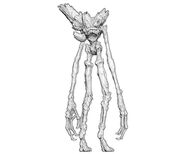 Concept art of the Noss (back view) 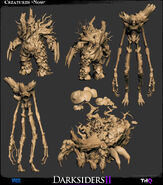 3D model of the Noss (incl. Gorewood and Karkinos)

Death battles a Noss
Add a photo to this gallery
Retrieved from "https://darksiders.fandom.com/wiki/The_Noss?oldid=32863"
Community content is available under CC-BY-SA unless otherwise noted.