None
The Grock is a boss enemy in Darksiders III and one of The Chosen that Fury encounters on her adventures, he is also the fifth and final Chosen boss fight and is the eight boss in the game.

The Grock is a giant goblin with a set of huge horns.

The Grock posses hand-to-hand combat thanks to his club and posses great strength, being able to hurl rocks with ease.

In the battle with Grock, he will attack by either swinging his club (up to two or three times) at Fury or by digging up giant rocks and throwing them at Fury, he will also swipe his left hand at Fury. After half of his health has been depleted, the Grock will do a ground slam with both of his fists. 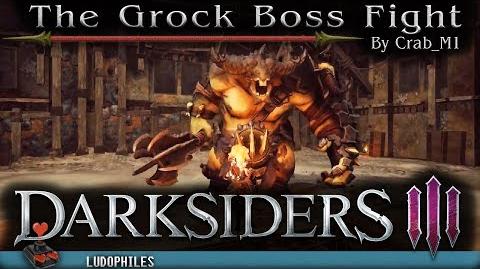 Darksiders III - The Grock Boss Fight
Add a photo to this gallery
Retrieved from "https://darksiders.fandom.com/wiki/The_Grock?oldid=33797"
Community content is available under CC-BY-SA unless otherwise noted.