The Griever is an insect like creature of gargantuan proportions who rules over The Hollow in the Destroyed City. Her "pets", the Swarm, have also made the subways their lair - she is the second of the Chosen that War needs to kill for Samael. She seems to have the lowest intelligence of all the Chosen except perhaps for the Stygian, never speaking and acting like a feral beast. She is one of the four tertiary antagonists of Darksiders (the other three being Tiamat, The Stygian, and Silitha).

After Ulthane directed him to the Hollow, the Horseman proceeded to hunt the Griever. War encountered her at the beginning of her lair, and chased the monster through the abandoned tunnels. He finally found her in her chamber and defeated her by smashing a train into her head repeatedly and ripping her heart out.

You first fight The Griever at the beginning of the dungeon. The first encounter of the fight is quite easy and even on apocalyptic you should do it without trying. During the first encounter of the fight, you can't actually kill The Griever as you do not have the Tremor Gauntlet, but luckily for you, there is a gun on the floor that you can pick up and shoot The Griever with. The Griever will try to shoot lasers at you and the lasers follow you wherever you go. The lasers shouldn't be that much of a threat until the second encounter with The Griever. You must keep shooting The Griever while avoiding its laser attacks. Soon after shooting The Griever enough times, it will retreat from you, but not to worry, you will fight it again at the end of the dungeon.

The Griever, unlike any enemy War has faced until now, cannot be killed by running up to it and attacking. This accomplishes nothing. The way to kill this over-sized insect is to squish it with the subway cart. However, the pesky blue crystals that have been dotted all over Anvil's Ford and The Hollows are blocking the track. War's Tremor Gauntlet will make short work of these.

This can be difficult, as War does not have all that much space to work with if he wants to keep the laser from the crystals, but it can be done if War alternates between jumping over the laser and ducking under it. It is better to smash crystals with an aerial maneuver, as it is quicker and more efficient then ground attacks. Once the crystals are destroyed, the battle becomes much easier.

War should push the subway cart along to the edge of the tunnel, because if he pushes it too far out into the room, The Griever will force it back. The cart itself will shield him from her laser. Once the cart is just exiting the tunnel and entering the room, War should use the Tremor Gauntlet to smack the cart forward. Finally, the Griever is hurt.

But she is not out, or even down. She will shove the cart a ways back into the tunnel, just the right distance for War to slam it into her again. But he will be kept preoccupied for a short while, as the Griever slams her frame into the wall, sending heaps of rock falling from the ceiling. War can avoid these with his dash ability and a hefty chunk of luck.

After the structure is stable, the Griever will revert to her laser. This is War's cue to slam the subway cart into her a second time. Now, the Griever will fall, and War can smash her blue crystal with the Tremor Gauntlet, creating a genuine weak point in the Griever. However, before he can use it, he and the cart are slammed back as the Griever awakens. She will summon a swarm to attack War, and because of the sheer volume of demons attacking War, they may take a large chunk of his health. War can defeat them easily by grappling them, giving him a large quantity of health.

From hereon, the battle follows the same pattern: Slam the cart into The Griever once, she causes the ceiling to fall in. Twice, and she will fall, where War can deal decent damage with the Chaoseater. When she awakens, she will summon the swarm. Rinse and repeat until the instant kill button appears, then sit back and relax as War takes her heart. 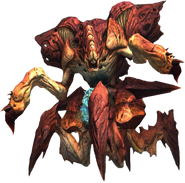 The Hollows, where the Griever lives, is an abandoned subway system.

Retrieved from "https://darksiders.fandom.com/wiki/The_Griever?oldid=32841"
Community content is available under CC-BY-SA unless otherwise noted.