Templar of the Damned

The Templar of the Damned is a (mini) boss enemy in Darksiders III. The horseman Fury encountered it during her mission to destroy the Seven Deadly Sins, she later eliminated it and retrieved an Essence of a Chosen as a reward.

The fiery Chosen possesses an Undead Champion and hides it's true nature until receiving a bit of damage upon which the Undead Champion becomes wreathed in flames revealing the fiery nature of the Abyssal Creature possessing it.

It first uses the attacks of normal Undead Champions until it receives enough damage upon which it reveals it's possession by a fiery Chosen and starts using fiery versions of it's previous attacks. 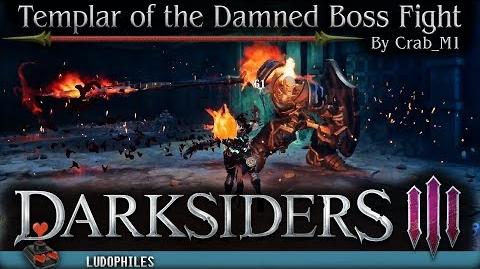 Darksiders III - Templar of the Damned Boss Fight
Add a photo to this gallery
Retrieved from "https://darksiders.fandom.com/wiki/Templar_of_the_Damned?oldid=33271"
Community content is available under CC-BY-SA unless otherwise noted.