On Foot
Carried by Minions

Sloth, also known as Lord of the Flies, is a member of the Seven Deadly Sins that were originally imprisoned by the Four Horseman many centuries before the Apocalypse. However, upon the End War's premature onset and the destruction of humanity, Sloth, along with his brethren, were freed and began to ravage the Earth and threaten the Balance. He is also the fourth boss of the game.

Sloth is one of the Seven Deadly Sins, who were deemed a danger to Creation by the Charred Council and were locked away. When the apocalypse was prematurely triggered, however, the 7 escaped and found their way to Earth. Now, the Charred Council have called forth Fury to hunt them down and execute them, a mission that she gleefully accepted.[1]

True to his name, Sloth, now having made a home of the subway stations near the Griever's lair, sends out his minions to do his dirty work while he lies back on his throne. A testament to his laziness is, without a doubt, the fact that the throne is made of filth and covers a large part of his body. Nevertheless, if need be, he is more than willing to engage even a Horseman into combat.[2]

True to his name and title, Sloth has absolutely no desire to do anything but sit upon his throne and let his insect slaves do everything for him. Even the decision to choose is considered tiresome and boring to Sloth; thus he prefers to not choose at all. He doesn't even care if his fellow Sins stand or fall against Fury; only comfort is his concern. Fury even noted that Sloth gained more exercise in a millennia just from their battle.

Sloth is incredibly cynical, finding life itself a joke and the ideas of Balance and dignity to be a myth. Ideals that people follow to make themselves feel better, to give themselves purpose. He also grew bored with the Apocalypse, claiming he was "over it".

Despite Sloth's rather unappealing appearance and lifestyle, the Lord of Flies possesses a rather charming and confident voice. He uses this to persuade his opponents to abandon their missions and "relax", just as he attempted with Fury and almost succeeded in if it had not been for Fury being goaded by the female Watcher. This is his tactic to avoid the effort of fighting a battle at all.

Despite his namesake, Sloth is capable of fighting his own battles when forced into the situation, as Fury had done when she destroyed his throne. Yet strangely, as he lay beaten and bloodied, Sloth wasn't concerned about his death but instead taunted Fury over her purpose in her mission.[2]

Being the embodiment of sloth, Sloth sits down on his throne and is often carried by his crab-like minions. In battle, Fury has to dispatch of these minions first, thereby bringing down the throne, while Sloth is in his throne he will use his Sloth-empowered sceptre to ether fire dark green goop-like blasts to fend her off or attempt to hit her with his staff and sends his minions on the ground to try to stop her. The strategy in this part of the fight is to kill the crabs on the back of the throne, which is made harder by the fact that the throne constantly rotates. Until the throne is broken, no damage can be given to Sloth himself, the best strategy take out the crab-like creaturs is by using Fury's rage mode, which not only can it take out the crab-like creatures must faster, but it can hit more than one of the crab-like creatures.

Once the crab-like creatures have been taking care of, Sloth will break free from the throne and engage Fury head on, this is were the true battle begins. Sloth mostly uses his long sickly-dull-yellow Sloth-empowered staff to swipe at Fury and whipping at her with his tail, as well as flying and jumping to creating a shock wave from around himself, he can also leap at Fury in attemo o crush her. His weak spots are both his belly and his tail, which can only safely be targeted for a limited amount of time before he starts to fend off Fury again while dealing significant amounts of damage. 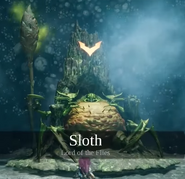 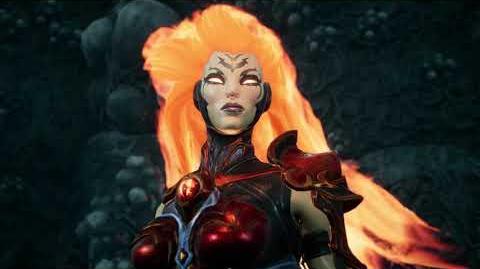 Sloth Concept Art
Add a photo to this gallery

Retrieved from "https://darksiders.fandom.com/wiki/Sloth?oldid=33791"
Community content is available under CC-BY-SA unless otherwise noted.