Leader of the Deadly Sins

Pride, also known as the Keeper of the Vigil, is the de facto leader of the Seven Deadly Sins that were originally imprisoned by the Four Horseman many centuries before the Apocalypse. However, upon the End War's premature onset and the destruction of Humanity, Pride, along with her brethren, were freed and began to ravage the Earth and threaten the Balance she is also the secondary antagonist and the mandatory tenth and penultimate boss of the game.

An angelic-like being who calls herself the Seven Sins' leader, whether they accept it or not. Pride claims she has more in store for creation than what anyone, even her fellow Sins, can hope to understand.[1]

Pride and her fellow Sins were released from their cage by none other than The Charred Council, with the expectation that she and one of their champions, Fury of the Four Horsemen of the Apocalypse, would wipe each other out. Pride however did not take too kindly to being a pawn in someone else's game and schemed to make her would-be enemy her ally.

Towards this end, when Pride was approached by Fury outside the South End church, she told the rider that she was unworthy to face her as she was and to come back after she's defeated the rest of the sins, before retreating to her self-dedicated temple. With her fellow Sins as hurdles to overcome, Fury would go on to grow powerful as Pride had intended.

Indeed Fury would rise to the task set for her, defeating not only the sins but acquiring great power along the way. With this Pride made her proposal: the fulfillment of Fury's true purpose. Thus Pride inquires how the world came to such a horrendous state to start with, about how the balance and plan were nothing more than mere lies and fabrications which nobody ever cared to follow suit on in the first place...but what if they were true...

Pride then proposed an alliance with her adversary in helping her give Earth direction: order for was that not Fury's true purpose. They would be the balance this world deserves! They would be greatness!

Sadly for Pride, her hurdles were more effective than she had intended, for Fury had grown past her previous personality as a self centered berzerker with ambition for power & prestige above all and rejected Pride's proposal. With that, Fury and Pride fought with Pride ultimately losing.

As Pride lays beaten, Fury pins her down and demands answers. As she lays defeated, Pride questions if Fury had communed with the Lord of the Hollows or not; knowing fully well that he knew what she now knew about the Council's deceptions. She gets them though not from Pride herself, but rather Fury's watcher, who reveals herself to actually be Envy, who kills Pride herself, then steals back the Talisman of Sin before finally absorbing Pride into her Amulet, thereby allowing Envy to completely gain the combined power of the Seven Deadly Sins.[2]

For a member of the Seven Deadly Sins, Pride appears akin to an angel; having majestic gold armor, shining azure wings, long grey hair and an ornate mask. However, her open skirt that drags with her legs appear burned to black and shredded, while the crown hovering over her head appears cracked and broken, likely hinting at her true nature.

Behind the ornate mask supposedly hides a beautiful face, but in reality, it is a scarred one. Her scars drags down over her right eye to her lip.

As the embodiment of the Deadly Sin of Pride, Pride herself is confident to a fault, as well as haughty, arrogant and contemptuous to everything besides herself. Pride doesn't even contemplate how the concept of pride is a sin. Likewise, she looks down upon her fellow sins, even though she is often considered their leader, as she does not care if they fall and make her the only Sin left.

As a testament to her arrogance, she considers everything in the Creator's design to be beneath her and her so-called light. Pride especially thought lowly of the Sin's hunter, Fury, calling her lowliest of the Horseman and unworthy to face her. Thus, she hoped to build something upon the shattered Earth worthy of her own greatness. She dubs her realm Aires, which had statues and stone carvings bearing her own likeness.

However, Pride's confidence and arrogance could be nothing but a facade to hide her own insecurity and shame over her appearance. Behind her mask lies a broken and scarred face which fills her with shame when Envy mockingly points it out which is a likely hint at the symbolism that overt pride is hollow and false. In addition, her own arrogance led her to be manipulated by her sister, the covetous Envy, leaving Pride to be at her mercy.[2]

Despite her overarching sense of self-worth, Pride is by no means ignorant of the goings on of the world, as she is perceptive enough to recognize Fury's personal growth after accomplishing the task lain out before her, to the point of even going so far as to commend the Horsemen for her accomplishments. The Sin was also aware that the Universe is broken and the Charred Council are as much to blame as the warring factions of heaven and hell.

Pride also went as far as to state that the cosmic balance which everybody was fighting about was a faux pas, an existential lie used as a meager guideline which nobody really bothered to adhere to on the surface, which was something Pride pointed out to her pursuer when she voiced how someone along the way had lied to her, and how the Lord of Hollows knew it too; that someone being those who the Black Rider served had originally unleashed the Seven.

She also despite claiming the balance was a lie suggests for a chance for it to be true by giving the world direction through order making herself and Fury the balance the Earth deserves! To her they would be greatness!

She then stated that despite their adherence to Balance, Pride was very much aware that The Council was infected with her concept; they do not, in fact, have any real loyalty to the Balance they claim to serve and have been manipulating it from behind the scenes to their own ends. Pride eventually admitted that the Seven Deadly Sins, as a whole, only existed to debauch humanity. However, without any humanity to lead astray, Pride brings up the question of what purpose do she and her brothers & sisters serve at the time.

Being the leader of the Sins, Pride is the most powerful of them all. As the representation of the sin of Pride, she has the ability to weaponize the azure light of her namesake in various ways, including creating a magical sphere for defensive purposes which is resistant to Fury's Barbs of Scorn for a time.

In addition, Pride can charge her sword swings with Pride energy. Halfway through the battle, she uses her statue's head to fire off 2 azure beams of Pride from the front and back of the statue's head to corner her opponents and surprise attack them.[2] The sin also boasts a pair of bright, luminescent wings with which she uses to fly and hover around the battlefield.

Such a quality only serves to further bolster her stupendous ego, as to signify her standing above the masses, while not so much as touching the ground upon which her adversary stands upon. She often uses this aspect to deliver a damaging aerial attack from where she swoops down and swings her blade at an enemy.

She'll give away a tell of when she'll do so by cackling maniacally before rushing towards the ground swiping her edge at her unsuspecting prey. Another tactic she likes to use through her azure energies is discharge a flurry of pride charges at an enemy which zero in on their mark from a distance before exploding. Whenever she needs space to breath, Pride will often release a black & white energy pulse while doing a 360 degree sword swing.

Both of these tactics can be chained together with other powers, such as the homing blasts for the aerial raid. or the burst of energy before the forming of her shield. Pride also has various combos to complement her master swordsmanship, combining roundabout sword swings with a lunging dash sweep soon after.

The power given to her by the council remains largely unknown. Pride seemingly has the capacity to channel her pride energy in order to animate and manipulate lifeless material; hence her creating the vigil from which to observe from afar.

Before the battle begins, Pride will first conjure an energy shield around herself that not only can unleash a shock wave that can damage Fury if too close, but can also makes her invincible to all of Fury's attacks, the only way to dispatch the shield is by attacking Pride repeatedly, which after the shield is down will stun her for a brief moment, allowing Fury to damage her. Pride also possesses other attacks, such as swinging her sword at Fury or charging up for a spinning sword strike, all of which can be dodged. Pride can conjure the energy shield again if needed, at times Pride can fly away from Fury to avoid most of her attacks.

After Pride lose nealy half of her health, she will unleash a double headed statue head that will fire an azure beam from both heads that will clutter up the arena and will sometimes corner Fury as a suprise attack. In this phase Pride also gets a set of two new abilities, if Fury is far from Pride she will fire a set of energy bullets from her sword that can somewhat home in on Fury, another attack that Pride posses is that she will fly high in the air and do a charging sword thrust at Fury. 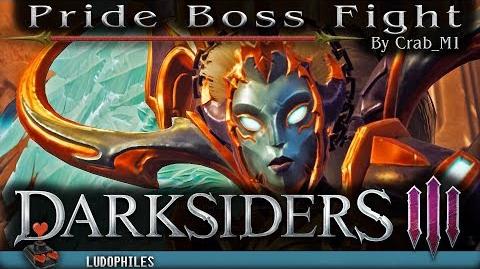 Pride Concept Art
Add a photo to this gallery

Retrieved from "https://darksiders.fandom.com/wiki/Pride?oldid=33794"
Community content is available under CC-BY-SA unless otherwise noted.