Lust, also known as the Ruler of Twisted Desire, is a member of the Seven Deadly Sins that were originally imprisoned by the Four Horseman many centuries before the Apocalypse. However, upon the End War's premature onset and the destruction of humanity, Lust along with their brethren was freed and began to ravage the Earth and threaten the Balance, they are the sixth bosses of the game.

A charming and twisted being who knows how to discern motives and desire, Lust takes delight in preying their foes' deepest wants. Deception is an art and Lust is its master.[1]

Lust, alongside their fellow Sins, fought against the Four Horsemen of the Apocalypse and after a harsh battle was sealed away. Eons later, the Horsemen's masters, The Charred Council, chose to unseal the seven Sins in a gambit to have them and the Horsemen wipe each other out.

Putting their newly acquired power to use, Lust travelled to a battlefield where the Angels' Seventh Legion clashed with a hoard of Demons and used their powers to poison the newly formed swampland and reanimated the corpses of Angels and Demons alike to serve their whims.

Lust found themselves hunted by Fury of the Four Horsemen and tried their gambit to sway Fury under their control. Faking their death, Lust presented an illusion of Fury's fellow Horsemen War, Death and Strife and used them to fabricate a story of a conspiracy between Heaven and Hell to start the Apocalypse and divide the Earth between them.

Lust almost succeeded in turning Fury into their pawn against Creation, but unfortunately, they made her brothers bow to her, which enraged Fury enough to the point that she tore through the illusion. Fury and Lust fought for a time but midway through the battle, the Archangel Usiel arrived seeking his own revenge on the Sin. However, Lust put their silver tongue to work on the Angel and instead convinced him to join them and restore the seventh legion to its full glory.

Fury subdued Archangel and Sin alike and pinned the latter under her. Lust attempted to bargain with Fury by offering up the location of one of her fellow Sins Envy, viewing the loss of their 'sister' as simply losing the dead weight. Fury, believing she had already defeated the Sin and tired of Lust insulting her intelligence, rips the Sin's throat out and seals them away in the Talisman of Sin.

Lust appears as an androgynous Warlord wearing high heeled boots and lipstick. They also appear with a skull-shaped mask that covers only the upper half of their face, a helmet decorated with ram's horns, greasy gloves, a chain mail covering their abdomen, a yellow loincloth that descends to their knees and a cape similar to crow's wings. They are always referred to as "they", being the fact that Lust has a voice that is a mixer of a man and a woman.

As the embodiment of desire, Lust takes great delight in delving into their foes' motives to gain a grasp of their deepest desire, so as to take advantage of them and bend them to their will. They speak in a charming, polite and very calm manner as if trying to make a deal with their foes to achieve their greatest desire.

Fury herself considered Lust's tempting offers and words to be intoxicating. This is apparent in their battle with Fury and Usiel. They attempted to entice Fury with her desire to be the leader of the Horseman and with Usiel's desire to return to Heaven with the Seventh Legion whole and victorious. Though they partially succeeded in turning Usiel over to their side for a time, their efforts towards Fury failed and enraged her, proving that one with enough willpower could resist Lust. Like most of their fellow Sins, Lust is only interested in their own affairs and survival. Lust was more than willing to give up the location of Envy to spare themselves.

In light of this, however, Lust is aware that in the long run, they are as much a pawn in the grand scale of this war for balance as everyone else, which was just what Fury was when she started her quest. They are also sharp enough to spot their sister even while wearing the guise of one of the Council's watchers.

Lust is a master of illusion who can deceive those affected by their powers. When first confronting Fury, the Deadly Sin of Lust surrounds themselves with brown energies of pure Lust but in the actual Boss fight, they simply rely on physical attacks and on corrupting the Archangel interfering with the battle. They were given the ability to raise both dead Angels and dead Demons as Undead by the Charred Council upon their release not that they ever bothered to call them into the battlefield when fighting Fury.

During the first phase of the battle, Lust will attack Fury with basic sword combos, they can do a sword swipe with either a left or right swipes, jumping above Fury and doing a quick sword swipe below at her, a quick sword thrust and/or do a charge attack with the sword in front of them, all of them which can be avoided by dodge. At times, Lust can quickly sprint back to avoid Fury's attacks and will sometimes block some of Fury's attacks with their sword.

In the second phase after Lust loses half of their health, the battle will remain the same, except this time Usiel will fight alongside them to fight Fury. 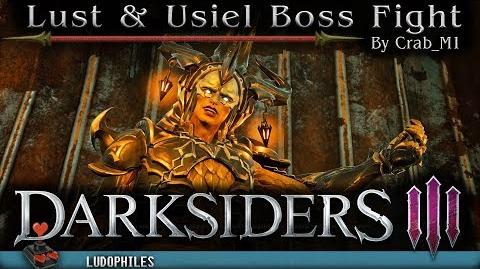 Retrieved from "https://darksiders.fandom.com/wiki/Lust?oldid=33173"
Community content is available under CC-BY-SA unless otherwise noted.