Lord of the Hollows

The Lord of the Hollows is a powerful entity that Fury encounters within the Hollows during her quest to destroy the Seven Deadly Sins. Wielding power enabling both weary Angels and Demons complete release from the cycle of life, death and rebirth of the Well of Souls, the Hollow Lord aids Fury but his own goals remain unknown.

The Lord of the Hollows is a towering yet somewhat skeletal figure, wearing black and gold armor, wielding a large iron staff and upon his back appears the Ark of the Covenant chained upon his body. His eyes are also fiery orange.

While it is unknown how powerful he is, the Lord of the Hollows possesses the power to contain the Souls of willing Angels, Demons and Humans who have grown weary of the endless war between Heaven and Hell. In his mindset, the Hollow Lord is releasing Souls of the war thrust upon them. He possesses an even lower view on the Charred Council and of their machinations, even calling Fury ignorant and blind to their plans and lies.

Originally, the Lord of the Hollows was a Demon chosen to be a member of the Charred Council. Like many, he believed in the Council's mandate to bring balance to Creation and towards this end, he dedicated countless years towards their goals -- until he didn't, that is. At some point, the Council had disregarded its mission to equalize the Universe at large, instead concerning themselves solely with overseeing the forces of Angelic and Daemon kind alike, albeit openly ignoring the dust-born Humanity as a consequence.

But the Lord of the Hollows did not follow suite. Unlike the Demons and the Angels who were made the way they are by The Creator, Man came into being under their own power from nothingness; thus he, as did many secretly see, that they are the ones meant to embody and bring true balance to Creation. When the Lord of the Hollows realized that someone or something had started planning the extinction of Humanity, moreover that the Council itself would let it happen unabated, he made his gambit to save them. Thus the Demon-turned Old One would hollow himself in order to contain as many Souls from Angels, Demons and Humans as possible, in order to serve as a new seed for Mankind, adopting the Moniker he's now known for, while having become the last possible refuge for those who have simply grown tired of the constant endless tide of conflict.

To those rumored to come wishing to have their Souls removed from the cycle of reincarnation and immortality, as well as his prior affiliations, his former race deemed him a traitor to the cause, both to their dark lord and the very nature of the Balance itself; either the Council expunged him from their ranks, or The Lord of Hollows left their table of his own accord long ago.

After the death of her beloved Phantom Horse Rampage, Fury is rescued by the Lord of Hollows before she could be finished off by Wrath or his associates. In Fury, the Lord of Hollows saw something familiar: an agent of the Council betrayed by her former masters and left without purpose. He also saw an arrogant being who would destroy herself in her rage and misplaced loyalty to a false cause if something wasn't done.

Thus the Lord of Hollows mentored Fury, gifting her his powers in the form of the Flame Hollow and instructing her to hunt the Demon Abraxis and bring the demon warlord's Soul to him so that she might stand a chance against the sins. After Avarice's or Sloth's defeat, The Lord of Hollows called Fury to his chambers and gave her the Storm Hollow as a reward for her self-restraint in not falling to the sin's temptations before sending her back while in an amused state after she asks him to give her the rest of his powers.

After a rattling fight against Lust, the Lord of Hollows calls Fury for a third meeting and is both surprised and pleased with the Horsemen's resistance of Lust's temptations of becoming the leader of The Four and in not striking down the traitorous Archangel Usiel. As a reward for Fury's legitimate growth in character, The Lord of Hollows gifts her the Force Hollow before sending her away again, against her will this time much to his amusement.

After Fury avenges the defilement of Rampage's corpse by Gluttony, the Lord of Hollows calls her back to his chambers for a fourth time and gifts her with his last hollow, the Stasis Hollow, in response to Fury overcoming her own rage. It should also be noted that his health has notably taken a turn for the worst and he informs the Horseman that their next encounter will be their last before allowing Fury to return to her business.[1] Fury eventually returns to the Lord of Hollows with Abraxis' Soul in tow, whom warned her The Old One intends to hollow the whole of the Earth and install himself as the new order. Incensed by such a notion, she demanded answers from the ancient demon.

Thus the Lord of Hollows tells his story of how he used to work for the Council, to the disbelief of present company, but grew indifferent to their one track mindedness and now works towards humanity's preservation, stating that although many among one cosmic echelon or another liken mankind as the forgotten class, he and a select few knew better than that, reasoning that most everyone within the higher tiers of power secretly know what mankind really is and fear them for it; hence many among these debouched sects wished for their ultimate destruction.

The Hollow Lord details that someone on either side of the conflict caused an early End War to facilitate such circumstances to which the Council feigned complacence regarding these machinations; thereby allowing for it to come to pass. With his final words of endearment to his chosen, he completes his Becoming, transforming himself and all the souls he had gathered into an amulet that will serve as the second chance for the new human race, and declaring Fury their guardian. The Amulet is a critical piece in-story and the larger game as a whole; as noted by Ulthane, who out of shame of his part in the apocalypse, refused it when Fury offered it to him, the Council by way of their panicked reaction at the sight of it as well as their demanding Fury to give the item to them upon its presentation and Lucifer berating Lilith for not eliminating the Lord of Hollows when she had the chance.

Though mysterious, distrusting and stern, the Lord of the Hollows is a powerful and bold being who possesses both great capability and his own form of ancient wisdom. He is also welcoming to those who have become weary of the conflict between Heaven and Hell, offering them true release in becoming hollowed. However, he will not force his views and beliefs on others, as he only accepts those who are willing to be hollowed. In addition, he prefers to let actions speak the intentions of individuals rather than words.

The Lord of the Hollows bears a skeptical and suspicious view on the Charred Council, stating that he knows of it/their true nature and of the many machinations concocted by them. However, the Hollow Lord likely knows when to take the side that serves the greater good as he aids Fury in her quest to destroy the Seven Deadly Sins and advises her to hunt down a renegade Demon Lord so the Earth remains intact. Fury's final encounter with the Lord of the Hollows reveals that he, among a few others, is well aware that the universe is sick; of how it has a cancer slowly eating away at it. Upon voicing his true views of the Council, being a former peer among their number, the Hollow Lord reveals that he originally believed in their cause for Balance but grew very disabused with their fixation on policing the forces of Heaven and Hell while leaving humanity overlooked in the process. Thus, he abandoned the Council to endeavor in realizing the Third Kingdom's true potential as is seen by his saying that someone must take a stand and rise above the cloistered lie that has become of the universal balance to which all sides show insincerity towards.

Ultimately, his true motive was to provide the means for mankind to reach their destiny in embodying the Balance. He knows what Humanity is capable of achieving, and knows that while the Angels and Demons are exactly what they are and will likely never change, Humanity constantly changes and was meant to evolve, becoming something to personify the cosmic order, outside of the expectations of others, save the Creator.

In this, the Lord of Hollows knows that other cosmic forces fear Humanity and want them gone, hiding their underlying fear or jealousy behind superficial snark and disdain. Being attentive enough to understand the intricate counterplots happening behind the scenes in the universe abound, both from his seat on the Council and from listening to musings beyond their halls. It was for this reason that he gathered a multitude of Souls for the renewed seed of Man in order to give them the means to meet said hidden potential. His final say is that unlike the Charred Council, Heaven and Hell, the Lord of the Hollows does not fear Humanity. Nor does he view them as a minor race of hairless simians like the former two kingdoms due to knowing full well just how conniving, dishonest and self-important other celestials truly are.

He also fears for the well being of Earth as much as the human race while seeing his becoming as a form of redemption for eternal complacency.

His encounters with Fury shows the Lord of the Hollows as an originally unwelcome mentor and guide of sorts. Though Fury often brushes off his wisdom, she accepts his aid in the Hollows he grants her. In return, while he often is annoyed with her arrogant attitude, he saw the potential within her to be Humanity's protector and guardian, thus aiding her and choosing her side.[1] 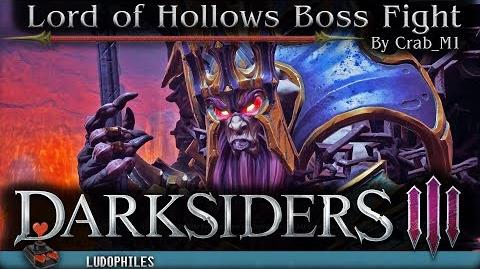 Retrieved from "https://darksiders.fandom.com/wiki/Lord_of_the_Hollows?oldid=33822"
Community content is available under CC-BY-SA unless otherwise noted.