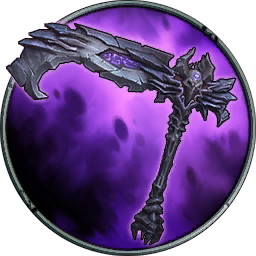 The Dark Fortress: Recieved after you have defeated the Ice Giant in New Game +

Lifebane's eponymous ability gives it roughly 30 base Ice damage per attack, and by extent allows it to freeze targets. Lifebane also has a unique form of Health Steal, in which a small portion of the Ice damage it deals is returned to the player as Health. Attacking a target frozen in Ice drastically increases the amount of health stolen per attack. Lifebane also seems to extend the duration of the freeze to help exploit its unique ability, though by how much longer is difficult to ascertain at this time.

Lifebane's Special Ability works with all Ice damage dealt from both the Scythes themselves, and any secondary weapon that deals Ice damage. However dealing damage with a secondary weapon to a frozen target does not drastically increase the amount of Health stolen.

Retrieved from "https://darksiders.fandom.com/wiki/Lifebane?oldid=24291"
Community content is available under CC-BY-SA unless otherwise noted.