Among the powers granted to the four horsemen by the Council's blessing is the ability to transform into a 'super form' for a short period of time in which their offensive and defensive power is dramatically increased. By engaging in combat the horsemen build energy fueling their angelic/demonic nature then by tapping into this inner conflict by embracing suppressed emotions they unleash forms reflecting their inner selves to devastate the battle field.

Though the transformation was originally the result of the council's blessing they also act to suppress the Horsemen's power, even when they were working for the council it wasn't they who taught the horsemen how to do this but Samael. When War and Death was cut off from the council's blessings and had to make do on their own they had to quickly learn how to tap this power on their own, as such while it can't be maintained as long their power is no longer shackled to anyone.

Chaos Form is War's most powerful form in Darksiders. It has the appearance of a hulking fiery demon far larger than War's normal form with vestigial wings on its back and a sword of fire in its hand.

War's Chaos Form is utilized by way of War building the Chaos energy necessary to transform through successful melee attacks. Once a certain amount of energy is obtained, War is able to trigger the transformation at will. Sustaining the transformation rapidly drains War of Chaos energy, and when the Chaos Gauge is empty, War reverts back to his typical humanoid state. When War is in Chaos Form he is invulnerable and inflicts massive damage; even a Trauma will die in five strikes. War is also able to slam his sword onto the ground in front of him to perform an area of effect attack that damages all foes near the strike. This attack also deals more damage to a single foe than his typical strikes in Chaos Form, but cannot be used as quickly in succession. He is able to perform a leaping strike that also has area of effect properties. Besides powerful enemies like one of the The Chosen, there are few capable of surviving even a brief meeting with War's Chaos form. War is not able to use any of his other weapons, abilities, or Wrath powers for the duration of his transformation. However, his Affliction power, if triggered just prior to transforming, will not be canceled by transforming and will function as it normally would. Once triggered, the transformation can be deactivated prior to fully draining War's Chaos Gauge, but he will lose all his remaining Chaos energy by reverting to normal. The transformations take place in mid-air, which allows War to deal a large amount of damage to all foes near him when he hits the ground after transforming.

Before the Legendary Enhancement War's Glory is obtained, Chaoseater is the only weapon which can be used to obtain Chaos energy. After finding War's Glory, War's other melee weapons will build Chaos energy with successful attacks, but not nearly as quickly as Chaoseater does. The enhancement also drastically increases the amount of time War remains in Chaos Form for, as well as the rate at which the Chaos Gauge is filled.

War unleashes this power during the Apocalypse in the game's prologue while battling a Trauma with Angels flying overhead instantly recognizing the fiery entity below them. When the Tormented Gate rises to retreat, a horn sounding can be heard similar to that of an Earthcaller. All at once, War is drained of his power, rendering him unable to sustain his Chaos Form. Later, after killing Tiamat, Samael tells him to tap into his inner rage by striking down The Watcher, thereby giving him back his Chaos Form. 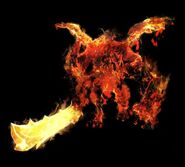 Reaper Form is Death's more powerful form, similar to War's Chaos Form. Once transformed, Death takes on a larger skeletal form. His face is completely hidden in the shadows of a cowl, a large robe envelopes the rest of his body, and skeletal wings sprout from his back. When fighting on the ground he hovers slightly, and is able to use this ability to fly. While transformed, he wields a massive scythe with many skulls engraved into the flat of the blade.

Death can partially tap into his Reaper Form at the end of many of his attack sequences without using any reaper energy. The partial utilization manifests itself as a semi-opaque energy construct in the shape of Death's Reaper form that briefly surrounds him at the end of the aforementioned attack sequences. Reaper form's attack power depends either on Death's Arcane stat or Strength stat, whichever is higher. If Strength is the dominant stat, then the Reaper Form's Critical Chance and Critical Damage will depend upon the Crit Chance and Crit Damage stats, while if Arcane is the dominant stat then it will depend upon the Arcane Crit and Arcane Crit Damage stats. The higher the dominant stat, the more the base damage of the Reaper Form.

Death, like War, is able to acquire the Reaper energy required for a full transformation by landing successful melee strikes. Only his scythe attacks serve to build this energy; secondary weapons will not serve this purpose without the use of a special talisman. A few of his magics also allow him to acquire Reaper energy if upgraded in a particular way, such as Harvest or Murder. While in this form he is not quite invulnerable but the damage he takes is almost entirely mitigated. He deals massive amounts of damage with his scythe, allowing him to easily tear through large groups of weak enemies or go toe to toe with tougher monsters. He is also able to telekinetically control the movements of his scythe, using it, in one instance, to remotely carve up the innards of a monster known as Karkinos. In this form, he is able to teleport short distances and fire purple energy projectiles from his scythe. While he cannot use any of his Wrath powers or other abilities while in Reaper form, the form itself does not affect the status of abilities used just prior to transforming. As such, he can still benefit from magics such as the power boosts and electrical discharges of his Aegis Guard ability. Additionally, offensive "fire and forget" magics such as Frenzy, Murder or Exhume that were used just prior to transforming are not canceled, and function as they normally would while Death's Reaper form is engaged. Like War, Death is able to revert to his usual form at will, but unlike War, he retains any transformation energy that he did not utilize instead of automatically draining the rest of his gauge. Once the transformation ends, either prematurely or after the whole duration, Death will emit an extremely powerful burst of purple energy that severely damages all foes near him. Death is also seen using his transformed state in many fairly casual situations, often activating it in order to take advantage of his Reaper form's ability to fly and hover.

Death is able to access Reaper Form after gaining the first few levels of combat experience on his journey to revive humanity, though it can grow more powerful through further experience. He frequently used it to finish off particularly powerful foes. 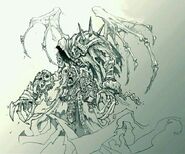 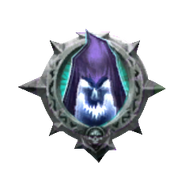 Reaper Form Icon
Add a photo to this gallery

Similar to her brother's transformations, Fury's Havoc bar builds energy when Fury attacks enemies, and once filled Fury can transform into her Havoc form at will. Fury deals arcane damage in this form, similar to what Fury does with her counter attacks, thus the damage she deals while in this form can be increased when you put points into your arcane stat. In a pinch Fury can use a Havoc shard to recharge her Havoc form instantaneously. Havoc form can be enhanced by equipping various Enhancements onto Fury's weapons: 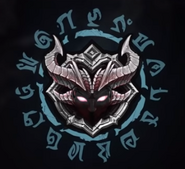 Havoc Fury facing Abraxis
Add a photo to this gallery

Anarchy Form is Strife's powerful transformation, similar to his siblings own transformations. Like the other Horsemen, after gathering enough energy by attacking enemies with his main weapons to critical mass, Strife transforms, amidst a explosion of pink energy, into a huge black horned goblin with a scorpions tail for a pony tail and a mini-gun for a hand. The end of his tail is able to unleash a beam of destructive energy along with a barrage of missiles.

Retrieved from "https://darksiders.fandom.com/wiki/Horsemen_Transformations?oldid=33750"
Community content is available under CC-BY-SA unless otherwise noted.