Consume everything in sight

Gluttony, also known (by fans) as the All-consuming Emptiness, is a member of the Seven Deadly Sins that were originally imprisoned by the Four Horseman many centuries before the Apocalypse. However, upon the End War's premature onset and the destruction of Humanity, Gluttony, along with his brethren were freed and began to ravage the Earth and threaten the Balance. He is the seventh boss of the game.

A massive octopus-like monstrosity of complete hunger, Gluttony seeks to devour anything to satisfy his never-ending appetite, Angels and Demons included. Even then, his hunger never ends.[1]

When The Charred Council turned the Seven Deadly Sins loose on the Earth Gluttony wasted no time in living up to his name sake devouring anything and everything he comes across be it Angel, Human or Demon. One notable example is the Phantom Horse Rampage after he was killed in the Charred Council's machinations, not that the sin cares where his food comes from.

The fat epicure holds the rare example as a sin Fury fights twice, briefly appearing as a obstacle Fury has to prod out of her way on the path to Lust. Returning from fighting against the sin Fury once again prods Gluttony away, only for the Talisman of Sin to chime in on the creature's true nature causing Fury to give chase. Tracking Gluttony through his underwater layer she eventually finds the sin who tries to trick and devour her using his illusions.

Instead Gluttony only enrages Fury when he accidentally coughs up her horse's half chewed head leading to Fury using the Force Hollow to become too heavy for the sin to inhale. Making use of conveniently placed re-spawning magical sea mines to blow the leviathan creature up on the inside before finishing his physical form as to suck him up with the Talisman of Sin.

Gluttony is a veracious sort with an endless hunger that can never be satiated. The more he consumes, the greater his cravings become; as such, his ravenous proclivities have pushed him to continually devour anything and everything he can get his teeth around.

A rather slovenly and unkept individual, the All-Consuming Emptiness often surrounds himself in half eaten trash and excretion accommodated with an ungodly stench that can affect even a senseless individual like the Watcher accompanying Fury. Despite this hideous appearance, Gluttony holds himself in greater esteem than most would perview the moment they gaze upon him to the point that he often sees his voracity as a kind of twisted mistress whom he serves wholeheartedly.

Whenever he speaks, said abominable effigy often growls and chokes on his words, many of which are straddled with guttural belching or gurgling as though he were suffering from perpetual indigestion.

Gluttony is as vulgar as he is boastful, often trimming his vocabulary with his viciously psychotic intentions, as is seen by his voicing about how his hunger increases his power as he intends to grow large enough to devour the Earth whole. In battle he often brags about being his own mighty work in which all will despair at the sight of. Beneath all the bluster, however, Gluttony is a tad sullen at the fact that no matter what he consumes, he will never be truly full.

As a result, he grows more and more frustrated and temperamental as well due to never finding anything that will fully sate his hunger.

He also boasts a taunting side to his character, as after having partially devoured Rampage's desiccated carcass. Gluttony cruelly unveiled the phantom horses defiled remains to his former master as a vile gesture to his starvation.

Gluttony's powers had been vastly amplified by the Charred Council, having similar abilities to his sibling Lust while possessing original abilities all his own. He can project convincing illusions of whatever it is his intended victim hungers for. By himself, he has incredibly stretchy limbs to claw and swipe at opponents with. Also Gluttony can use his anglerfish lure-like form as a club to flail and smash his enemies. Within said lure, a horrendous entity shows itself after opening up; revealing a creature comprising of a mass of mouths and long tongues that Gluttony uses to communicate with.

The sin can inhale copious amounts of wind creating a vacuum effect to suck in and wolf down his intended quarry before spitting out their remains. Other attacks include glowing malachite-green spews of pure Gluttony force, which is similar to yet distinct from the sickly yellow disease-ridden spews projected by various obese Demons.

As noted by Fury while tracking him on Earth. Gluttony did not have the massive leviathanic appearance he now possesses prior to the premature apocalypse. As a result, his lure body has now become a mere extension of his larger main form which consists of a monstrosity bearing four eyes, numerous large tentacles and a worm-like razor toothed maw with which he uses to bite and gnash at consumables from a distance. Like the semi-humanoid lure he has, the larger monster headed Gluttony can use sharp inhalation in order to draw in and bite down on an adversary with its hideous teeth.

Despite its gargantuan girth, the giant body is deceptively fast and agile, as it is able to seamlessly traverse water as easily as a person can stand upright or walk through air. In fact, Gluttony is seen often using this to its advantage by rapidly lunging at a target while submerged in order to chew enemies to pieces.[2]

His new, more monstrous form is more likely than not a gift by the Charred Council. It also has the ability to grow larger and nastier with every new morsel consumed by Gluttony, allowing it to become ever more powerful with each and every ingestion made by the bloated debasement made incarnate. This is something the sin himself coined often while fighting Fury directly, as he often boasted that he would eat the whole of the earth if left unchecked, thereby saying that more size equaled more power and more of him as a consequence.

In the first part of the battle, Gluttony will fight Fury in his tentacle form, he will attack Fury by swiping at her with his tentacle arms or slaming both of his arms to the ground, both of which can be avoided by dodging. At times he will go inside his tentacle, which he will then whip around in his tentacle form and then slam down on the ground, up to two times. The only way to avoid it is by going to the corners of the arena or dodging the tentacle slam. Gluttony can also rise in his tentacle form and launching out three to five white colored slime that not only can do damage to Fury, but can also slow her down, he can also fire it directly at Fury as well. Another attack that Gluttony has is that he will attempt to suck Fury into his gaping stomic mouth, this is one of the most dangerous attacks as it can take away 70% of Fury's health, it can be avoided by being far away as possible and doing multiple dodging slides, the easiest way to avoid it is to activate the Force Hollow.

After Gluttony loses half of his health, he will turn into his monsterious kraken form and fight Fury underwater, in this battle Gluttony gains a new set of attacks, he will attempt to chomp Fury with his gapping mouth or by slam down one of his tentacle arms at Fury. Gluttony retains his ability to inhail Fury like before, but it has a new change, if Fury is able to avoid being inhaled. Gluttony will spit back the durbry he comsumed at Fury. During this battle, the only way to damage Gluttony is by luring a nearby mine as Gluttony attempts to inhale Fury so that it will blow up inside of him dealing massive damage, repeat this process one more time and then Gluttony will be down, a button icon will appear just above Gluttony, activated it and the battle is won. 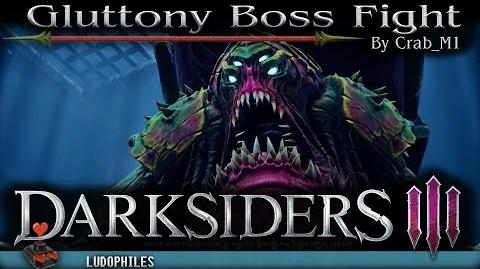 Retrieved from "https://darksiders.fandom.com/wiki/Gluttony?oldid=33793"
Community content is available under CC-BY-SA unless otherwise noted.