The following is a walkthrough for the game Darksiders. Note: Be aware that spoilers will be included. To avoid spoilers, please don't read the rest of this article. This walkthrough is restored from a cache copy after being edited and destroyed as it is a more complete text-based walkthrough than many others. Scattered throughout the text are video illustrations, and for the most part reflect the text walkthroughs. At the bottom of the page are just the videos, categorized in similar fashion to the groupings of the text.

The average game time is around 18 hours if playing on Apocalyptic.

1. Your beginning position. Follow the instructions. The Chaos Form is a very powerful mode where you are invulnerable and deal great damage. During the normal part of the game, you'll be able to engage Chaos Mode only for a short duration, but during this tutorial you are allowed to stay in it for quite a long while.

2. Achievement Open Air Parking: Exit Chaos Mode (same buttons you used to enter it, LB+RT). Around this point, giant spikes will shoot out of the ground preventing you from going back. Grab a car (B) and look up at the sky near the giant lying on the ground. A helicopter should start coming by. Try to target it (click Right Stick to enter targeting mode) and throw the car (RT) at the helicopter to destroy it.

3. Kill all the enemies to continue. Around this point, a horn will sound and you will be forced out of Chaos Mode and lose about half your health.

4. Kill all the enemies to continue. Climb the demonic growth that appears.

5. Jump and grab the wire across the gap.

In the Seraphim Hotel area there are Two Chests to collect.

The Crossroads has nine Chests and one Soldier Artifact to collect.

The Library contains five Chests and one Soldier Artifact.

In Scalding Gallow, you will be able to collect five Chests.

On PS3 and Xbox360 versions there is a ways to unlock a secret, additional item - The Harvester. The Scythe which is a regular item should be available for 1000 Souls.

In the Choking Grounds Access Cave, you will be able to unlock two Chests and one Champion Artifact.

In Choking Grounds, you will be able to collect nine Chests and two Soldier Artifacts.

The Broken Stair Access Tunnel contains only one Chest.

The Broken Stair contains six Chests and one Soldier Artifact.

The Jailer is a giant creature, made from dead corpses and controled by Undead Soldier. This "driver" is unreachable for War's normal attacks, so we need to put him out of his "cabin". Look at his right (from you point of view) shoulder and you'll find a three yellow spots there. Mark and hit all three in a round with your Crossblade and The Jalier will be kneeled down, letting you hit Undead Soldier. Quickly dash to him and slash him with your normal attacks. Do this for three times and an INSTANT KILL sign will appear above this giant - just come in and finish him off! After hitting the Undead Soldier, shoulder spots will become red and The

Jailer will become totally mad, crushing and killing everything around him. Just stay away for a while and wait him to cool down (the spots will return to yellow). The Jailler summons a backup of some annoying enemies, but you can just avoid them with running around and dashing. Aim at the spots, do not pay to much attention to little enemies.

Be sure to grab the green Chest (H5 Twilight Cathedral 18/28) along the side of the room if you get into low health situation.

Tiamat seems to be the toughest Boss in the game, because of War's current weakness. (You can come to her with only two lifestones as maximum amount of life.) The key to easy victory is to move often, rapidly and smart - use your dash ability to get off her attacks and don't stop to hit her with your Crossblade, when she is on the ground. Before the fight, she will climb down holding the corpse of the dead Angelic Beast War was riding earlier. She will show off her healing ability (mentioned later) and then fly into the air. When she's in the air, she attacks by sweeping along the ground with her claws at high speed, and breathing fireballs at War from a distance. To get her down, War must pick up one of the Bomb Growths around the edge of the arena, and throw it at her. After that, he can use the Crossblade to hit the fire, and then the bomb. If this is done right, the bomb will explode, slightly damaging Tiamat and making her fall to the ground. If you can time it right, you can actually skip the entire fire and cross blade phase if you throw the bomb right as she fires a fireball, causing the bomb to blow up right in front of her face. Both of these methods enable War to start hitting her with his weapons. She will soon get back up, however. Once this sequence has completed she will either repeat it or move on to phase 2 of the fight.

In phase two she attacks War in numerous ways:

When Tiamat's health bar is almost empty, you can finish her off with a spectacular finishing move, which involves ripping her wings off. You don't need to press INSTANT KILL button - the fight will end automatically with a cutscene.

This dungeon is  complicated and can give a hard time finding all the collectibles in the basement such as the  Bloodthirst Enhancement or Artifacts, if you missed them the first time around. Here is a video made especially for the purpose of leading you once again after defeating Tiamat. After progressing through the dungeon, the layout changes after raising the Three Crystal Blade elevator. This video does not cover all the collectibles in the Cathedral, only ones in the basement (below ground floor) that can become somewhat difficult to reaccess.

After giving Samael Tiamats heart he will bring up the Ulthane problem and grant you the Chaos Form power. With this you become invincible and inflict great amounts of damage for a brief period of time. After use the power needs to recharge for some time before you can use it again.

In this area it is possible to collect, two Chests and one Champion Artifact.

In this area, it is possible to collect five Chests and two Soldier Artifacts.

In this area, you will be able to collect ten Chests

In this section, there are two Chests to collect.

In this section there are 27 Chests, two Soldier Artifacts, and one Champion Artifact.

There are 500 Souls to collect, as well as a Hellfire Enhancement, two Wrath Shards, and a Lifestone Shard.

In this section, there are four Chests and one Soldier Artifact.

In this area, there are two Chests and one Soldier Artifact.

In this area, there are four Chests to collect.

In this section, there are 25 Chests, three Soldier Artifacts, and one Overlord Artifact.

Ashlands, The Road to the Stygian[edit | edit source]

The Road to the Iron Canopy[edit | edit source]

In this area there are 27 Chests, two Soldier Artifacts, and one Champion Artifact.

In this section, there are three Wrath Shards, 1 Overlord Artifact, one Champion Artifact, three Soldier Artifacts, one Life Shard and one Abyssal Armor Piece to collect.

In this section, there are thirty four Chests, two Soldier Artifacts, and one Champion Artifact.

In this area there are seven Chests to collect.

A Duel with Uriel[edit | edit source]

When you are ready, warp to Anvil's Ford. 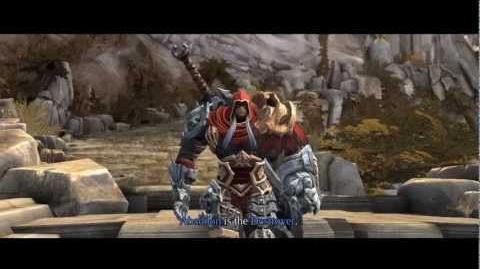 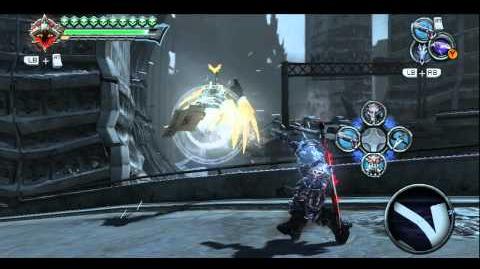 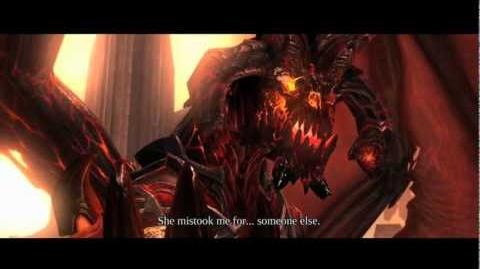 Episode 46 - Darksiders 100% Walkthrough The Destroyer
Final Boss and Credits
Add a photo to this gallery
Retrieved from "https://darksiders.fandom.com/wiki/Darksiders_Walkthrough?oldid=33702"
Community content is available under CC-BY-SA unless otherwise noted.