Darksiders III is a Hack and Slash, Action-adventure video game made by THQ Nordic. It was announced on May 3, 2017 by THQ Nordic and was developed by Gunfire Games. It was finally released on November 27, 2018. It is the parallel sequel to Darksiders II and is the third installment of the Darksiders series. It features Fury in a quest on the ruined Earth to hunt and destroy the Seven Deadly Sins. During the game she encounters Ulthane.

Darksiders III features a leveling system and a crafting system. Similar to War, yet dissimilar to Death, Fury collects souls from enemies and from objects in the environment, as a form of currency or an expendable resource. According to the developer, the threats of the game's world will grow stronger as the player progresses through the story, matching Fury's power every time a Deadly Sin is defeated.

The council commanded Fury to depose of their opposition but they're ex-disciplinarian rebuked their orders. Now well aware that they no longer valued Fury or her brothers and intended to kill them all. After a grueling final battle, Fury finally defeats Envy and seals her within her own talisman. But the Charred Council confirms they're disavowing her and attempt to destroy their former charge. If you do not have the Sigil stone, Fury will simply take the Sin's amulet and toss it at them like a denotative charge before fleeing back to Earth through the Reflecting Pools gateway.

If the player does have the Sigil, Fury uses it to block the Charred Council's attack, who do so out of fear its power. Although she doesn't know the functionality of the relic, she can see the council abhors it realizing the item has greater import than she knew of. Ultimately, Fury resists when they demand she relinquish it to them and then throws the Talisman of Sin that held the Seven Deadly at their faces instead. Causing it too explode, beating the Charred Council before escaping back to Earth. Upon Fury's return to Haven, where the Makers are guarding the last humans. She now realizes this war was motivated by the celestial's fear of humanity. With hell's forces heading towards their location, the portal created to enter the Council Chamber is used as an exit strategy to save what remains of humanity. As the Makers and Jones make a final stand against the Destroyers armies, Fury vows to protect whats left of humanity and prepares to depart. As she watches the fight, she realizes the human helping the Makers fend off the hellions is actually Strife. The remains of humanity are now safe and hidden away in another realm. Elsewhere, the grand architect behind everything knows what Fury has done, but still intends to carry out his plans of destruction.[5]

Darksiders III received mixed reviews by critics and fans alike. While fan reviews highly praised it for its crafting system, combat, writing, story, characters and voice acting, others highly criticized its higher difficulty, poor checkpoint systems, mediocre bosses, very clunky/glitchy dodge mechanic, terrible camera, bad frame-rate issues and glitches (both of which have been patched in a recent update), very long loading screens, the rather poor pacing in the gameplay and tedious backtracking. Despite this, many fans consider Darksiders III to be better then Darksiders II,  though not nearly as good as the first game in the series, Darksiders. There are fans who considered Darksiders III to be the best game in the series. 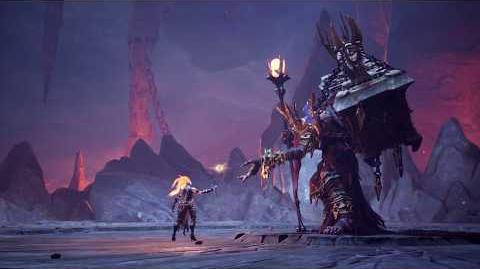 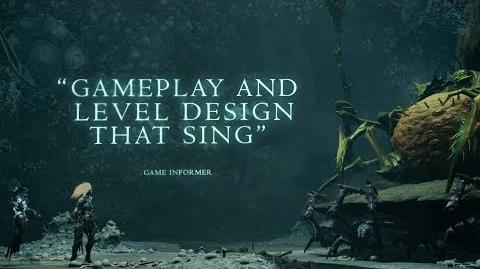 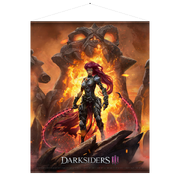 Retrieved from "https://darksiders.fandom.com/wiki/Darksiders_III?oldid=33325"
Community content is available under CC-BY-SA unless otherwise noted.