From the dawn of creation, The Charred Council has maintained the Balance across existence. Carrying out their orders are the Four Horseman of the Apocalypse, Nephilim (powerful beings spawned from the unnatural union of angels and demons) who have pledged themselves to the Council and been granted immense power. However, this power came at a tragic cost: the Horsemen were ordered to use their newfound strength to wipe out the rest of their kind. What followed was a bloody battle on Eden where the Horsemen, obeying the will of the Council, annihilated the Nephilim.

Still reeling from the events on Eden, War and Strife have been given a new assignment -- Lucifer, the enigmatic and deceptive demon king, has been plotting to upset the Balance by granting power to master demons throughout Hell. War and Strife must hunt down these masters, gather information, and ultimately fight their way through a tangled, demonic conspiracy that threatens to forever upset the Balance and unravel all of creation.[2][3]

After the Four Horsemen have attacked and decimated the Nephilim in Eden, they are summoned by the Charred Council. The Council suspects that the demon king Lucifer is planning something with Samael to upset the Balance and orders War and Strife to investigate. After invading Samael's keep, they find it under attack from another Master of Hell, albeit a lesser one: Moloch. Samael informs them that he is not in league with Lucifer and the current attack on him is the result of that. Before he can say anything else, Moloch attacks and Samael teleports the Horsemen to the Void to find and talk to his associate.

The Horsemen travel through the Void and find Vulgrim to be the associate Samael spoke of. Vulgrim informs them he can help track down Lucifer but he needs several artifacts. After collecting the required artifacts Vulgrim informs them that Lucifer has paid a visit to Mammon, another Master of Hell. Samael arrives at this point and suggests that the Horsemen find Mammon and make him talk about Lucifer. They find Mammon with several relics and weapons from Eden. After killing him, the Horsemen return to Vulgrim and Samael where they learn that Lucifer has opened a path to Eden, bringing its sacred water and turning it into poison. The demon Belial is in charge of this operation. After stopping the operation, they confront and defeat Belial but spare him. But after the Horsemen leave, Lucifer arrives and torture him.

The Horsemen learn that Dagon, the Drowned King is also helping Lucifer as Lucifer has offered Eden to him. Meanwhile, they meet Abaddon, the guardian angel of Eden. He informs them that Lucifer is spreading corruption and asks them to help him cleanse Eden. Afterwards, the Horsemen track down and kill Dagon. They return to the Void and Samael advises them to destroy the source of Moloch’s power before they attack him. They do so and together with Samael, they attack and kill Moloch. However, before his death, Moloch tells them that Lucifer’s plan is complete and Samael knows about it.

After returning to the Void, Samael tells the Horsemen that Lucifer had asked for the souls of the Masters of Hell after their death in exchange for their services. Samael also tells them that Lilith is plotting with Lucifer as well and together they have made an artifact called the “Animus” which is fueled by the souls of the Masters of Heaven and Hell who had accepted Lucifer's offer. This artifact is used on Earth to corrupt mankind, turning them into the volatile and self-destructive species they grow to become later on. The Horsemen go to Earth to find mankind living in sin and realize that they have helped Lucifer achieve his goal. Lucifer talks to them through a human child and tells the Horsemen that the corruption of humankind is spreading and cannot be stopped.

Afterwards, they return to the Charred Council who declares that humankind needs to be watched as a Third Kingdom. They then forge the Seven Seals as a treaty to uphold the balance between Heaven and Hell: three of them coming from the demonic planes and three more coming from the angelic keeps and one from the Council itself. They declare whoever breaks the treaty shall suffer the wrath of the Horsemen, setting the stage for the future games.

The game's campaign is expected to take around 15 hours to complete.[4] Genesis is a Diablo styled top down third person action game. In single player the player alternates control of War and Strife on their journey using LB+A while there is also a co-op mode that allows two players control over either of the horsemen. War is a close quarters tank with a emphasis on receiving and giving high damage with the use of his Chaos Eater, he is also equipped with a Crossblade called the Vorpal Blade which allows him to perform ranged attacks and his Tremor Gauntlet to stun enemies.

Strife is a long distance gun fighter who must collect and use various forms of ammunition with a melee attack to stun enemies who get into close quarters, has a combo meter separate from his horsemen transformation that when filled gives him a boost in raw offensive power for a short period, he can also throw out explosive caltrops to help deal with enemies who get too close. Aside from that he has the Void bomb and the Ember Spark which aside from being needed for portal like and maze like puzzles he can also chuck at the enemy like bombs.

Defeating enemies earns War and Strife Creature Cores which allows them to equip unique abilities to help them in battle. Each Core and slot are broken down into three broad categories: Attack, Wrath and Health and matching a core to a slot with provide a increased effect. Additionally the cores increase in power the more of one kind of enemy that you acquire and provide more powerful bonuses.

Both characters are also equipped with a 'Ghost Hook' ability which serves as a grapple to both pull them towards grappling points and pull enemies towards them as well as a 'Shadow Flight' ability that allows them to perform a double jump or float on air currents to higher levels. Both characters have a attack meter that when filled will allow them to make use of Horsemen Transformations War's Chaos form and Strife's Anarchy form respectively. 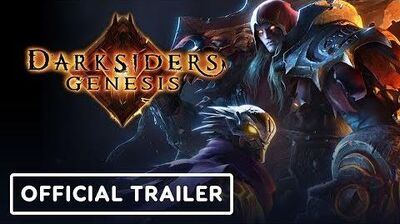 Retrieved from "https://darksiders.fandom.com/wiki/Darksiders_Genesis?oldid=33827"
Community content is available under CC-BY-SA unless otherwise noted.