Dark Angels are enemies almost identical to the Hellguard Angels, minus the color variation and higher health/attack, which even bear halberd like weapons. They come in two kinds of enemies, one with black wings and dark armor, appearing first in the Ashlands, and another with fiery red wings and red armor, which appear in the The Black Throne.

There are two variants of Dark Angels. Both variants lack the Angelic Lances that their uncorrupted Angel Soldier brethren carry, and instead carry either a large sword or a poleaxe. These weapons lack the barrel the lances have, and are unable to fire energy bolts, but they have a much stronger melee impact coupled with the fact that the Dark Angels are more resilient.

Outcasts abandoned from heaven, left to wander the earth

The first, earliest met kind have dark armor, shadowy looking wings, and pale green fires about their body. They only use melee attacks, and are rather easy to dispatch. They carry a double-bladed sword.

Elite angels corrupted by evil power, they are much stronger than their pale green counterparts. They appear throughout the The Black Throne. They have dark armor and are engulfed red flames. Their wings are black and they wield a large poleaxe. They too only use melee attacks, in addition to stronger abilities such as being able to knock War into the air with an upper cut swing. They are stronger than the first variant and can pack a punch, but can still be dealt with with relative ease if one is careful.

The Dark Angels appear two times in the game, The first, weaker, variant appears in the Ashlands. They show up several times, usually in groups of three. 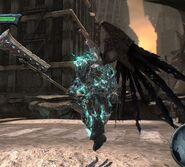 Forsaken Angel in the Black Throne