Custodians are ancient robot-like machines created by the Makers that Death uses for Dungeon exploration.

A giant, rolling mass of stone created by the Makers in days gone by, the Custodians have no real intelligence and are not capable of speech. However, these fearsome automatons are key to traversing many of the dungeons in the Makers’ Realm. Not only are they able to cross through lava without harm and create bridges across gaps with their extendable arms; they can also be used as a devastating force in combat[1].

Death finds the Custodians in various dungeons throughout the forge lands, but is only able to bring them life once he has used the Maker's Key to insert a piece of his soul into their bodies. Once that is done Death will be able to ride them and use their many abilities to: destroy Corruption, fight enemies, use their chains to cross huge gaps or use their power to activate ancient Maker machines.

However Death will also have to fight a Custodian infected by the Guardian's third Heartstone to which he will defeat after a brutal fight. 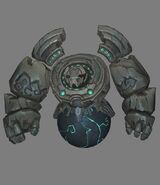 Retrieved from "https://darksiders.fandom.com/wiki/Custodian?oldid=27094"
Community content is available under CC-BY-SA unless otherwise noted.