The Crowfather also known as the Keeper of Secrets is a character and narrator featured in Darksiders II after Death came to him for help to prove his brother War's innocence but after being denied, he engaged in battle with Death and was killed by the Horseman. His spirit became Death's guide to the Well of Souls and after mankind was restored he was free to rest in peace.

Dark and mysterious as the namesake minions who flock to him, the Crowfather is the Keeper of Secrets. Like all things pertaining to the Crowfather, his race and origin are a mystery— although some believe him to be the eldest of the Old Ones. The Crowfather is sagely, lacking in patience and humor, but possessed of an ancient wisdom and knowledge of things forgotten, or best forgotten. Though he resembles an old weathered crone, the Crowfather’s mastery of arcane arts makes him a force to be reckoned with. His crow minions are fiercely protective, giving their very lives to strengthen his magic, or to murder any threat against him.[1] He is also one of the most well informed beings in the cosmos, rivaled only by the demon lord Samael in his ability to acquire information.

The Crowfather is an ancient being, rumored to be the oldest of the Old Ones. The details of his history are unknown, but his black familiars gather secrets for him throughout creation and he holds his secrets close, living a reclusive existence on an ice covered world referred to as the Veil.

When the Charred Council ordered Death to destroy the amulet containing the souls of the Nephilim, the Horseman instead gave it to the Crowfather for safekeeping. To ensure that he would be able to bear the amulet, the Crowfather bound Dust to Death in order to create a link between himself and the Horseman.

During the rogue angel Hadrimon's search for the Abomination Vault, he and his partner, Belisatra, sent constructs to trade with the Crowfather for secrets involving the Abominations. When their initial offer was revoked, they sent an entire construct army to wrest the Crowfather's secrets from him forcibly. Despite the Crowfather's great power, the battle might have gone against him had Death not received a vision of the battle through Dust. The Horseman traveled to the Crowfather's world. He crept and slaughtered his way across the battlefield, eventually meeting up with the Old One. The duo then combined their abilities and annihilated the remaining constructs. The Crowfather helped Death interrogate a dead construct by attaching the soul of a dying crow to its memories, allowing Death to use his necromantic abilities. The Horseman left soon after.

Later, after sorting through his familiars' memories of the attack, the Crowfather sent Death another vision, revealing that an angel had been responsible for the assault.[2]

After the Apocalypse, Death approached the Crowfather requesting aid in proving the innocence of his brother War. The Crowfather scorned him, forever cursing the day he aided the Horseman long ago for it cost him dearly. The Crowfather questioned why he should care what happened to War, to which Death responded that the secrets the Crowfather kept could help him resurrect humanity. The Crowfather opened a portal to the Tree of Life, saying that it held the answers Death sought, but closed it before Death could enter it.

In exchange for access, the Crowfather demanded Death destroy the amulet containing the souls of the Nephilim. Ever since Death had given it to him, the Crowfather had been tormented by the "voices" of the disembodied Nephilim, and it had cost him much of his sanity. Death refused and threatened the Crowfather to re-open the portal, but the Crowfather retaliated, saying the Horseman would not leave as long as he lived. The Crowfather then took the form of War and battled the Nephilim. After a fierce exchange, the Crowfather was mortally wounded by Death and reverted to his original form.

After demanding one last time that he open the portal, Death killed the Crowfather, telling him that his secrets would die with him. With his last breath, the Crowfather rasped that his secrets would die, but not Death's. He then began to dissolve into a black mass of crows. The amulet around the Crowfather's neck shattered and its fragments embedded themselves into Death's chest. The Horseman lost consciousness and the Old One's body collapsed into a dark vortex that consumed Death, leaving the Nephilim in the Forge Lands and setting him on the path to the Tree.

After his death, the Crowfather was sent to the City of the Dead as all souls are. There, Death met him again some time later and he began to aid the Horseman in his quest. Despite having been quite brutally killed by the Horseman, the Crowfather appeared to hold no grudge against Death, and the loss of the amulet appeared to have restored his sanity. He told Death how to access the Well of Souls, it requiring the two keys held by Heaven and Hell.

The Crowfather led Death first to Lostlight, where the Horseman confronted the corrupted angel, the Archon Lucien, for Heaven's key. He then led Death to Shadow's Edge, Samael's domain, where the Nephilim fought the Demon lord for Hell's key. Once Death had both keys, the Crowfather directed the Horseman to open the door to the Well of Souls, though he cautioned that Corruption had chosen a champion that awaited there.

Death entered the Well and fought the Avatar of Chaos, the Corrupted form of the first Nephilim, Absalom. After his victory, the Crowfather appeared beside Death and presented his choice. Death could revive either the Nephilim, or Humanity, raising one by sacrificing the other. With a moment of reflection, Death chose to protect his brother above all else. The Old One told the Horseman that a sacrifice was required for the resurrection. Death removed his mask and handed it to the Crowfather before casting himself into the Well of Souls and as the billions of souls emerged from the Well, the Crowfather soul disappears finally able to move on peacefully.[3]

The Crowfather is a very ancient being, knowledgable of many of the most closely guarded secrets in Creation and is not quick to part with his information, living up to his name as the Keeper of Secrets. His ancient powers make him a deadly foe even to the Horsemen.

During his time holding the Amulet, the ceaseless voices of the Nephilim, crying out in hatred and vengeance, drove him to madness. He came to hold resentment towards Death for giving it to him in the first place. After parting with the amulet through his death, he became far more amicable and even wise towards the Horseman and a vital ally to Death. The Crowfather possessed a bemused sense of humor during his time as Death's guide. 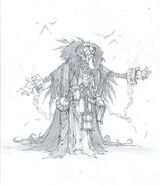 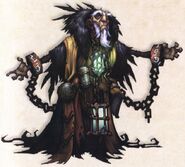 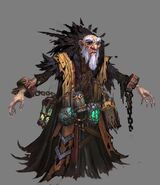 Retrieved from "https://darksiders.fandom.com/wiki/Crowfather?oldid=31825"
Community content is available under CC-BY-SA unless otherwise noted.