Bheithir was a creature that inhabited the subterranean caverns of the Nook, located in the Forge Lands. Similar to the Bat Queen Tiamat herself, Bheithir resembled a monstrous bat but, unlike Tiamat, wreathed in flame.

She served as a mini-boss in Darksiders II, one of the four monsters that the Maker Thane sent Death to slay in exchange for weaponry.

Bheithir and her kind once occupied the Forge Lands, hunting the Makers like cattle when they first began calling the Forge Lands their home. But eventually, the Makers rose up and hunted the beasts until only Bheithir remained. Afterword, she made herself a nest in the Nook, only leaving when she needed to eat.

Many years later, when Death came to the Forge Lands and defeated the Maker Thane in a duel, Thane told Death of Bheithir, among other monsters, and only when she and the others were slain, would he consider the Horseman worthy of his name. Death later traveled to Bheithir's lair and slayed her, retrieving a set of fire-enchanted sycthes called Bheithir's Talons.

When you defeat Bheithir, you'll receive Bheithir's Talons, a pair of Level 15 Scythes that inflict massive inferno damage in addition to base damage. The Talons are highly recommended for the boss battle against Argul, who is later encountered in Thane's Quest.

She lands on the right side of the platform, so facing her, there's a ledge you can drop off

and hang out at the very start of the engagement on your right (Note: There is another ledge towards the sides of the bridge). After she lands, she will spit fire, followed by dashing across the platform and perform her Leap ability, then turn and start trying to swipe you.

She starts off with Lava Streak, which is when you hop down the ledge and hang on until she dashes past and the fire clears (which is when the fire clears and you can resurface). After the leap, she will start attempting to melee you. All you need to do is stand in front of her and press dash (the backwards roll). If timed properly, your reaper form will pop up and take a chunk of life from her (7%~). That will be your primary source of damage besides squeezing in attacks between swipes. Eventually she'll leap or spit fire, in which case you jump down on a ledge on either side of the bridge and repeat.

For Reference, or TL;DR: Bheithir (Apocalyptic) 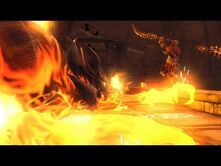 Add a photo to this gallery
Retrieved from "https://darksiders.fandom.com/wiki/Bheithir?oldid=32843"
Community content is available under CC-BY-SA unless otherwise noted.