Avarice, also known as The Collector, is a member of the Seven Deadly Sins that were originally imprisoned by the Four Horseman many centuries before the Apocalypse. However, upon the End War's premature onset and the destruction of humanity, Avarice, along with his brethren, was freed and began to ravage the Earth and threaten the Balance. He is the third boss of the game.

A goblin-like creature, Avarice collects everything that catches his fancy, whether it is worth something or not. All Avarice cares for is that it belongs in his collection. Avarice has two horns sticking out from his head, a large amount of jewellery and accessories, and a crushing amount of weight piled on his back in the form of random junk he has yet to dump into one of his piles. Among the items in his junk pack are swords, angel wings, gold, and demon limbs.[1][2]

Avarice is equal parts hoarder and kleptomaniac; he neither values nor cares about the items that he steals be they the lives of his enemies, their most valuable possessions or merely random junk he finds lying around. From his viewpoint, everything belongs to him and anyone who disagrees with him usually ends up a part of his twisted collection.

Avarice staked his claim inside of an abandoned museum, filing his collection of random junk taken from humans, Angels and Demons in towers dotting one of the main exhibit halls. He even reanimates the corpses of all the children in the city so that they can guard the museum for him.

Despite all of Avarice's plans and best efforts though, Fury still bests him in combat and adds him to her collection inside the Talisman of Sin.[1]

As with all the Seven Sins, Avarice is retroactively immortal. Being a physical embodiment of what he portrays, the sin of greed can never actually be vanquished. Though his physical body might dissipate, he will only recover after a short while before returning to optimum health should he suffer a fatalistic injury.

Avarice's personal abilities are relativistic amongst many of the celestial beings in the Darksidersverse. Bodywise, he has superior strength, speed, agility, reflexes, coordination and stamina compared to a common Homo Sapiens.

Having might enough to weaponize much of his collected baubles within his treasure trove stirring up the gold as well as to flail around with his claws creating trails of golden Avarice energies, Avarice can easily hop around and in between his knickknack mountain tops without fear of being unbalanced by the top-heavy burglar sack strapped around his back and shoulders, which is decidedly larger and more heavy-set than he is. As his name suggests, said sin is an expert thief and/or plunderer who can snatch up just about anything he can get his hands on with ease.

This is something that is made quite evident by the impressive haul of priceless riches and art pieces he'd collected over his short sojourn across the ruined world of mankind. The abilities given to him by the Charred Council are a mystery as Avarice showed little to no signs of bolstering in his battle with Fury.

It can be assumed that one of the benefits given to him upon his release from the Council's prison was the capability to manipulate the cadavers of reanimated preadolescent humans to serve as his eyes and ears within his territory. Said entities called upon by his power were known as the Children of Avarice; feral and hideously misshapen ghouls who attack by biting and scratching with sharpened claws and elongated teeth and often throw explosive charges or setting up bombs connected to tripwires in order to prevent intruders from reaching their master's territory.

Avarice will fight Fury by simply doing single or double claw swipes which can easily be avoided by dodging. Avarice can also jump high to either avoid Fury's attacks or to ground pound her. He can also leap to Fury's position and slam his fists into the ground in an attempt to damage her. Occasionally, Avarice will jump to one of the pillars and throw the junk at her. This can be avoided by dodging or hiding behind the junk pillars. Avarice will then slam his fists to the ground while jumping from the pillars. After he loses one-third of his health, he will equip either a cow skull, a driil-like object or a fridge and use it as a weapon. He will either do a single or double swipes or slam down attacks at Fury. After a couple of tries, the weapon will break and Avarice will equip himself with another weapon. This will be repeated over and over again until Avarice is defeated. 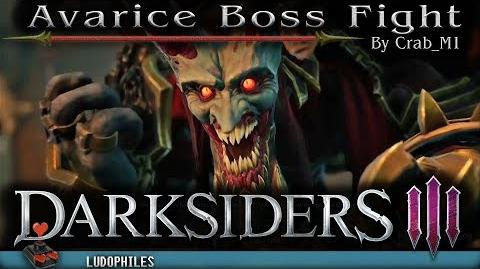 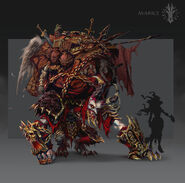 Avarice Concept Art
Add a photo to this gallery

Retrieved from "https://darksiders.fandom.com/wiki/Avarice?oldid=33774"
Community content is available under CC-BY-SA unless otherwise noted.