After proclaming that he alone was worthy to bear the key, he attacked the Horseman with the Rod of Arafel. The Archon, now visibly corrupted, blasted the Nephilim to a distant platform where they did battle. Despite his skill and the power of the Rod of Arafel, Death was able to kill the Archon and take the Angel Key.

When you fight Archon Lucien on the Xbox 360, if things get hectic enough on screen, you can set off a glitch in the game where Death can find himself running around underneath the arena used to fight the Archon. The platform will thus become demi-ethereal where you can attack Lucien, but Lucien is still stuck performing his normal moves, ergo, he can't attack you. From then on, you can basically spam him using jump attacks, or you can just continually shoot him. This of course is almost always a fluke or a bug in the programming, so don't count on it happening. 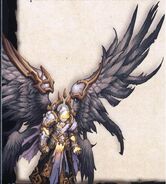 Concept art.
Add a photo to this gallery
Retrieved from "https://darksiders.fandom.com/wiki/Archon_Lucien?oldid=28238"
Community content is available under CC-BY-SA unless otherwise noted.