Co-operator of the Maker's Forge

Alya is a character featured in Darksiders II.

One of the Makers found in Tri-Stone, she will give Death his brother's pistol, Redemption, after he completes The Fire of the Mountain main quest. She is also a vendor of weapons and armor made by her brother Valus as well as the quest-giver for the side quest The Hammer's Forge. Completing this side quest will improve the quality of the items she sells. While her brother is working she handles all the talk, hence it is her to sell Death all sorts of weapons and armor. However, she will only do so after Death proves himself worthy in her eyes of doing business with: "Prove yourself worthy, and mayhaps we can do business." 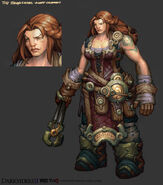 Alya
Add a photo to this gallery
Retrieved from "https://darksiders.fandom.com/wiki/Alya?oldid=32590"
Community content is available under CC-BY-SA unless otherwise noted.