On Foot
Through Corruption

Leader of the Nephilim
The Avatar of Chaos
Source of Corruption

Absalom, also known as the Avatar of Chaos, was the former leader of the now-late Nephilim and the first of their kind in existence. After his defeat at the hands of Death during the war for Eden , Absalom was resurrected from the darkness as the source of Corruption across the realms and is revealed to be the main antagonist and final boss of Darksiders II.

He planned to bring forth the end of all things to destroy the balance and recreate the realms in his image but he was finally killed by the same one who slew him before.

Absalom was the first of the Nephilim, crafted from the mingled dust of Angel and Demon by Lilith herself ages ago. All subsequent generations of Nephilim were conceived with his existence. He became the leader of his kind and led them on a crusade across many worlds, sometimes annihilating them entirely to feed their lust for carnage. As their leader, he was presumably involved in the creation of the Grand Abominations.

When Mankind was given the prize of Eden, Absalom led his armies against Heaven and Hell in an attempt to take the human world for themselves as the Nephilim never had a realm of their own. For this crime, the Charred Council condemned the Nephilim to destruction. The Nephilim that would become The Four Horsemen of the Apocalypse revolted against the destructive intentions of their kind and pledged their loyalty to the Charred Council, who gave them unimaginable power and charged them with the destruction of their own kin.

When the Horsemen rode, Absalom faced Death in single combat and despite his efforts, the first nephilim fell and stretched out his hand to his brother. Feeling guilty for what he had done, Death clasped Absalom's hand, but the First Nephilim was not dead but reborn from the darkness, and his anger and hate spread through out creation becoming known as Corruption and he was the source.

Death first encountered Absalom after the purification of the Guardian in the Forge Lands when he approached the Tree of Life. Enveloped by a gooey-black mass, Death was dragged into a shadowy space seething with Corruption, a dark figure towering over him. The figure taunted Death, and asked what he sought. When the Horseman replied with "The return of mankind," the figure taunted Death further, claiming that humanity couldn't survive the resurrection and did not deserve it. The Horseman explained that he was doing it to save War from the wrath of the Charred Council, only to have the figure question him about the Nephilim, asking why Death would spare one but not the rest. Death claimed that they were a threat to the Balance, only to have the figure angrily retort that none of this would have happened if the Nephilim had taken Eden, while also stating that Death rode against them and slew them all and then decided to entrap their souls in his amulet. The Horseman questioned the identity of the figure, who said he already knew, being once his brother; Death realized he was Absalom, but the figure said that he had forsaken that name and was now only Corruption, claiming that he soon would be all. As Corruption, Absalom blamed Death for his pain and claimed nothing would escape his grasp even him.

For the rest of his journey to restore humanity, Death encountered Absalom indirectly through the faceless Corruption. Only at the end of his journey did Death encounter Absalom in his true corrupted form at the Well of Souls from which he drew his power and was the only thing standing between Death and his goal. They engaged in a brutal duel, with Death emerging the victor, just as he had done eons before. The defeated Absalom crushed to the ground before asking Death to take his hand once more as his brother. Death paused for a moment's notice, but ultimately ignored Absalom's plea and ripped his scythe from him, killing the avatar of chaos once and for all and ending the threat of Corruption permanently.

Before his fall to Corruption, Absalom cared deeply for his fellow Nephilim. He was consumed by the desire to conquer a realm for them as they lacked one of their own, even if it meant destroying the race that already dwelt on a world. He didn't care for the Balance, believing that "might is right". Because of this, the future Four Horsemen turned against him. After his transformation into Corruption, he forsook his original name, desiring to destroy everything in his path and achieve vengeance for his defeat at Death's hands.

Despite being the Champion of Corruption, he states he isn't its source, but that Death is for his betrayal and slaughter of his kin, the Nephilim. His hatred for the Balance intensified after his transformation, seeking to consume everything and replace it with Corruption.

As the first Nephilim and the leader of his people on their devastatingly destructive crusade, Absalom was extremely powerful. Samaeal believed him to be the strongest of the Nephilim until Death managed to slay him in battle. He was known for wielding the axe Absolution in battle to a devastating effect. After Absalom became Corruption, his abilities grew tremendously and gained an array of devastating powers that managed to pollute and corrupt all Creation: 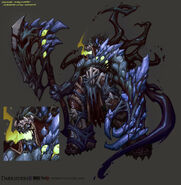 Retrieved from "https://darksiders.fandom.com/wiki/Absalom?oldid=32606"
Community content is available under CC-BY-SA unless otherwise noted.