Abraxis, in his own words, deals in class. Upon learning about the coming of The Destroyer he immediately set about gathering together a small army of demons to construct the Black Throne intending to position himself as The Destroyer's right hand man.

In the process though, he became a pawn to a much stronger Demoness, Lilith. Lilith told Abraxis that the Lord of the Hollows was a traitorous demon who sought to ascend to god hood and remake creation in his image: Hollow.

Seeking his mistress's favor and looking to eliminate a threat to his own life Abraxis started to hunt for the Lord of Hollows, which caused the former Council agent to plot against him.

Therefore when one of the Four Horsemen of the Apocalypse, Fury, made her presence known in his throne room informing him that his rival sent her to kill him he elaborated further on their relationship and what little he knew about the Lord, specifically the lie he had been told to do Lilith's bidding.

Fury is then given the option to fight him and bring his soul to the Lord of the Hollows or spare him.

Should Fury decide to spare Abraxis, the Demon shows gratitude and states that she is welcome within his fortress anytime.

Abraxis speak in a polite and respectful, if not cultured, tone even when Fury encounters him he did not attack even after learning that she was sent to kill him and chose to solve matters through talking things out. However, while Demons are considered vile and impossible to trust, Abraxis never did lie to Fury when informing her of the Lord of Hollows' plans, making him one of the few Demons who spoke true.

He tends to refer to himself in the third person. He's also very perceptive, quite possibly spotting Envy in her Watcher disguise on the first meeting. Despite this however, The Lord of the Hollows states he'd missed something important in this cosmic drama. Indicating that while the Traitor had seen everything from a different perspective Abraxis was blind to the whole truth. 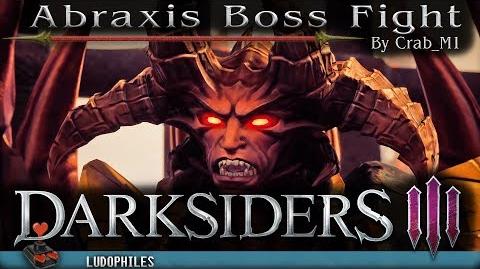 Retrieved from "https://darksiders.fandom.com/wiki/Abraxis?oldid=31919"
Community content is available under CC-BY-SA unless otherwise noted.